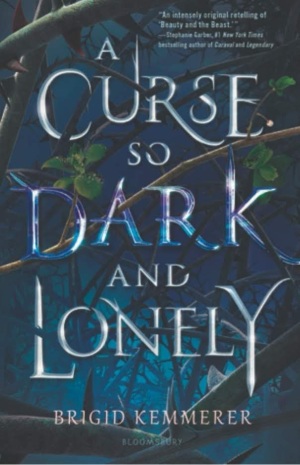 Fall in love, break the curse.

It once seemed so easy to Prince Rhen, the heir to Emberfall. Cursed by a powerful enchantress to repeat the autumn of his eighteenth year over and over, he knew he could be saved if a girl fell for him. But that was before he learned that at the end of each autumn, he would turn into a vicious beast hell-bent on destruction. That was before he destroyed his castle, his family, and every last shred of hope.

Nothing has ever been easy for Harper Lacy. With her father long gone, her mother dying, and her brother barely holding their family together while constantly underestimating her because of her cerebral palsy, she learned to be tough enough to survive. But when she tries to save someone else on the streets of Washington, DC, she’s instead somehow sucked into Rhen’s cursed world.

Break the curse, save the kingdom.

A prince? A monster? A curse? Harper doesn’t know where she is or what to believe. But as she spends time with Rhen in this enchanted land, she begins to understand what’s at stake. And as Rhen realizes Harper is not just another girl to charm, his hope comes flooding back. But powerful forces are standing against Emberfall . . . and it will take more than a broken curse to save Harper, Rhen, and his people from utter ruin.

I need to stop jumping on the hype train and getting disappointed. I was hoping I would like A Curse So Dark and Lonely, since so many people raved about how good it was, and how unique it was from other Beauty and the Beast retellings, but I couldn’t see it. Maybe I’m just tired of fairy tale retellings and Beauty and the Beast has never been my favourite, but I just couldn’t get into this book like I wanted to.

Between Harper, Rhen, and Grey, Harper was definitely the most interesting to me and I found myself skimming Rhen’s perspective a lot. Just seeing her get used to a medieval fantasy world from modern Washington D.C was fun, but her personality really stood out: she was stubborn, kind, and ridiculously brave. It was really great that Kemmerer introduced such a badass, fierce heroine with cerebral palsy, because there’s not enough disability rep in fantasy and I’m really glad this book adds to the canon of books with disabled protagonists. I loved Harper; I didn’t really care about Rhen, which really made a good amount of the book drag for me.

For a retelling of Beauty and the Beast, there was actually a lot of plot outside the original story with Lilith and the upcoming war. There was also a fair amount of romance as well, but I actually felt like it was balanced this time. However, the setting was just so generic fantasy that I couldn’t get into it, despite the rest of the plot brewing. The most unique bit was Grey’s ability to cross between worlds, and even then most of the book was spent in Emberfall. Lilith was terrifying, especially in how she treated Rhen and Grey, but I didn’t find her a compelling villain with a strong motive for what she was doing. It felt like she was just there to Be Evil.

I definitely think that there are a lot of people who would enjoy A Curse So Dark and Lonely; the hype I’ve seen around this book can attest to it. That Harper is disabled is one of the most interesting parts of the book and from what I’ve heard, good disability rep, but everything else appealed very little to me.

“I am always surprised to discover that when the world seems darkest, there exists the greatest opportunity for light.”

7 thoughts on “REVIEW: A Curse So Dark and Lonely by Brigid Kemmerer”