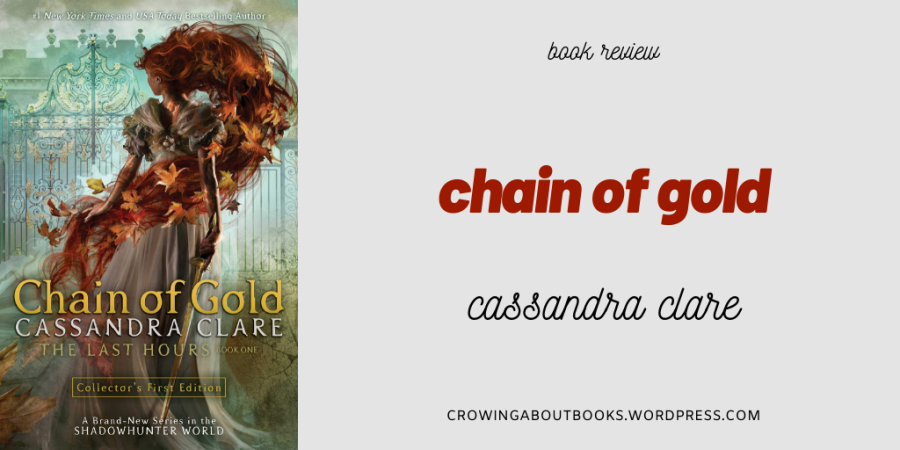 Chain of Gold by Cassandra Clare

Welcome to Edwardian London, a time of electric lights and long shadows, the celebration of artistic beauty and the wild pursuit of pleasure, with demons waiting in the dark. For years there has been peace in the Shadowhunter world. James and Lucie Herondale, children of the famous Will and Tessa, have grown up in an idyll with their loving friends and family, listening to stories of good defeating evil and love conquering all. But everything changes when the Blackthorn and Carstairs families come to London…and so does a remorseless and inescapable plague.

James Herondale longs for a great love, and thinks he has found it in the beautiful, mysterious Grace Blackthorn. Cordelia Carstairs is desperate to become a hero, save her family from ruin, and keep her secret love for James hidden. When disaster strikes the Shadowhunters, James, Cordelia and their friends are plunged into a wild adventure which will reveal dark and incredible powers, and the true cruel price of being a hero…and falling in love.

I feel like I’ve been waiting for this book for years, and you know what, at this point so many of Cassandra Clare’s characters mean so much to me that I can’t help but love them. Chain of Gold is no different. In a lot of ways, it’s your typical Cassandra Clare fare, but it shows a dimension of the Shadowhunters universe that we don’t usually get to see, and that’s what I found fascinating about this installment.

Firstly, the characters: there are so many of them, most of whose surnames are easily recognizable to anyone who’s read a Shadowhunters book. Our mains are James and Lucie Herondale, children of Will and Tessa Herondale; as well as Cordelia Carstairs, the half-Persian daughter of Elias Carstairs, Jem Carstairs’s uncle. The three are part of a wide assortment of friends, foremost of whom are the Merry Thieves: Matthew Fairchild, and cousins Thomas and Christopher Lightwood. There’s also older siblings in the mix: Alastair Carstairs, Charles Buford Fairchild, and Anna Lightwood. Then there are the newcomers to the series: the Blackthorns, Jesse and Grace, and Ariadne Bridgestock, the Inquisitor’s daughter. And those are just people I’d consider to be major characters, without even counting the adults.

And, honestly? They’re all fairly well-developed, and most of them endeared themselves to my heart. My two favourites are, without surprise, Matthew and Anna: close friends and Bohemians, who love carousing and art and poetry and the salon of the Hell Ruelle, a Downworlder haunt. Anna is, well, Anna Lightwood; confident in herself and a master seductress of women, harbouring love for a woman who wants her but can’t have her. And Matthew Fairchild–oh, my heart!–is suffering from so much pain and unprocessed trauma, but hides it all with merrymaking and jokes and perhaps a bit too much drinking. So: basically, these two characters have My Type written all over it.

I also adore Lucie and Cordelia and the rest of the Merry Thieves. Lucie’s an aspiring writer and whip-smart. Cordelia’s shy but knows how to get things done. Christopher likes to blow stuff up and I adore that. James is sufficiently dramatic for a Herondale. And Thomas is just incredibly soft and kind. Cassandra Clare has, once again, gotten me to fall in love with a new generation of Shadowhunters. This generation just brings me so much joy because of how tight the bonds of friendship are; everyone truly loves each other and wants to support each other.

I admit I was surprised by the amount of representation in this book. Of course our favourite Indonesian bisexual warlock makes an appearance, but Cordelia and Alastair are half-Persian, and it definitely does play a role in the story. And as far as we know, I believe there are seven LGBTQ+ characters out of a total of twelve. Of course, the three mains are all, as far as we are aware, straight, but I really wasn’t expecting such a diverse group of characters. And it really sucks that Cassandra Clare had to defend the diversity on her twitter shortly after it came out. People of colour existed in Western society in history! Queer people existed in history! And I am glad that this book at least makes an effort to show it!

The web of Cassandra Clare relationships are a complicated one, and this one is the most complicated yet. I tried to make a family tree and map out the relationships. It was difficult, to say the least. You see, for the first time we get Shadowhunters with parents, and Shadowhunters in peace. Not only do you have the signature Cassandra Clare love web, this love web is complete with complex bethrothals and engagements where characters don’t even love each other but become entangled in the Love Web anyways. Then you get parabatai relationships in the mix and it’s so, so complex. Thanks, Edwardian Britain! I do feel like it gets a bit much sometimes, and there’s a lot of drama, but I did enjoy it nonetheless.

I do believe this book has an entirely different dynamic than a lot of other books, where there are missing parents, lots of pre-story trauma, and relationships forged in stress. This is the Shadowhunters at a time of peace, a time of progressiveness, and thus you see how relationships have built up over years. Everyone seems so young in this book–a lot younger than Tessa, Will, and Jem in The Infernal Devices, who read as if they were adults; the gang here definitely seems more like teens. A lot of the characters have lived relatively sheltered lives–whereas the three mains in the last book are all orphaned and lonely and have already been through some pretty serious shit, the mains in Chain of Gold have a strong support system of parents, friends, lovers, and family around them, and it’s so heartwarming to see, say, Will as a father ready to support and love his children and his friend’s children.

Yet at the same time, because of this, most of the characters are experiencing loss, and the horrors of what it means to be a Shadowhunter, for the first time in this book. The one major exception is Matthew Fairchild, and he is coping very poorly to say the least. I wouldn’t say that this book is lighter than past books–Chain of Gold touches on themes like alcohol addiction and there are some very gory scenes–but contrasted against the idyllic life that the younger generation in this book starts out with, it’s very jarring. Normalcy isn’t normally something we see, but not all of the characters in The Infernal Devices came out happier at the end. The lives of the Blackthorns are juxtaposed against the rest of the main characters, but the Blackthorns are closer to what we usually see in the Shadowhunters universe, yet framed as the antagonists, which is really intriguing. I’m really excited to see what comes next.

Either way, it’s really lovely to see so many old friends from The Infernal Devices all grown up and living their lives, and the new generation of Shadowhunters to fall in love with. I very much enjoyed this book and think it an excellent addition to the canon, and I will be crying over Matthew Fairchild for the foreseeable future.

are you a fan of the shadowhunters universe? have you read chain of gold?