Generations of twin goddesses have long ruled Aeon. But seventeen years ago, one sister’s betrayal defied an ancient prophecy and split their world in two. The planet ceased to spin, and a Great Abyss now divides two realms: one cloaked in perpetual night, the other scorched by an unrelenting sun.

While one sister rules Aranth—a frozen city surrounded by a storm-wracked sea —her twin inhabits the sand-locked Golden City. Each goddess has raised a daughter, and each keeps her own secrets about her sister’s betrayal.

But when shadowy forces begin to call their daughters, Odessa and Haidee, back to the site of the Breaking, the two young goddesses —along with a powerful healer from Aranth, and a mouthy desert scavenger —set out on separate journeys across treacherous wastelands, desperate to heal their broken world. No matter the sacrifice it demands.

I’m very excited to be one of the stops on the blog tour for Rin Chupeco’s The Never Tilting World! Thanks so much to Shealea at Shut Up, Shealea for giving me the opportunity!

We have four main characters: Lan, Arjun, Odessa, and Haidee, two goddesses and two companions. The book opens with Lan punching someone in the face, which I have to say instantly drew me in. I thought for sure Lan was going to be my favourite character, but I came to like all four of our heroes. The narrative didn’t put any above the other: I felt like all four were fairly equally developed, and I really got to know them while I was reading. I actually really liked both the romance subplots in The Never Tilting World. One of the couples (Lan/Odessa) is F/F and had me on my toes the whole book with their will-they-won’t-they, and they had so much chemistry, but Arjun/Haidee was enemies-to-lovers and also soft, two of my guiltiest pleasure romance tropes, I found myself liking it anyways.

Lan is a definite tough girl, keeping her head up and trekking onwards no matter what, but she also struggles with post-traumatic stress throughout the book. Seeing her face up to her past and realize what she needs to do to heal was honestly so powerful, and it was written in a way you don’t really see in genre fiction? I feel like a lot of the time there’s no help for characters dealing with mental health issues in fantasy, so seeing Lan have a good support system–including what basically amounts to a therapist–was so refreshing to me. Can we have more of this in fantasy? Lan’s love interest, Odessa, is the goddess within the eternal night of Aeon, and I loved her character arc. Odessa goes from a sheltered girl to a leader, and it was so empowering to watch, but also terrifying. It’s through Odessa you see why the goddesses are called goddesses. Arjun starts out as grumpy, but he learns a lot from Haidee, who is just so soft and adorable. I found Arjun and Haidee complemented each other so well.

All four perspectives are in first person, which initially worried me–I am normally not great at dealing with multiple first-person perspectives, much less four in one book–but each character’s voice was distinct, and I had no problem figuring out who was narrating. I did find that the pacing stuttered in the middle–there was a very strong opening, and a very strong latter third, but I found my attention waning in the middle, where some of the weaker subplots took precedence over the journey of both characters.

The worldbuilding in The Never Tilting World was just so immensely cool, and though it’s definitely fantasy through and through, there’s a sci-fi vibe throughout, especially during Arjun and Haidee’s scenes. Because The Never Tilting World uses a lot of different terminology than your typical fantasy, it does take a little bit to get used to, and there’s a lot of lore surrounding the goddesses that had me flipping back and forth to get the story straight in my head.

The creatures that roam the world of Aeon, too, were unlike anything I’ve seen before. There’s horrifying monsters–some which I recognized were based off mythology and some which I’d never heard of. There’s also friendly creatures (that Haidee names and gets attached to, which in turn made me attached to them). The environment–one side of eternal night, and one of eternal day–was also interesting. I love it when genre fiction messes with climate, and The Never Tilting World provides a picture of how people adapt to the most extreme conditions. In a way, it points to a testament of survival and the need to do good, two groups of people fighting to live and heal the world. 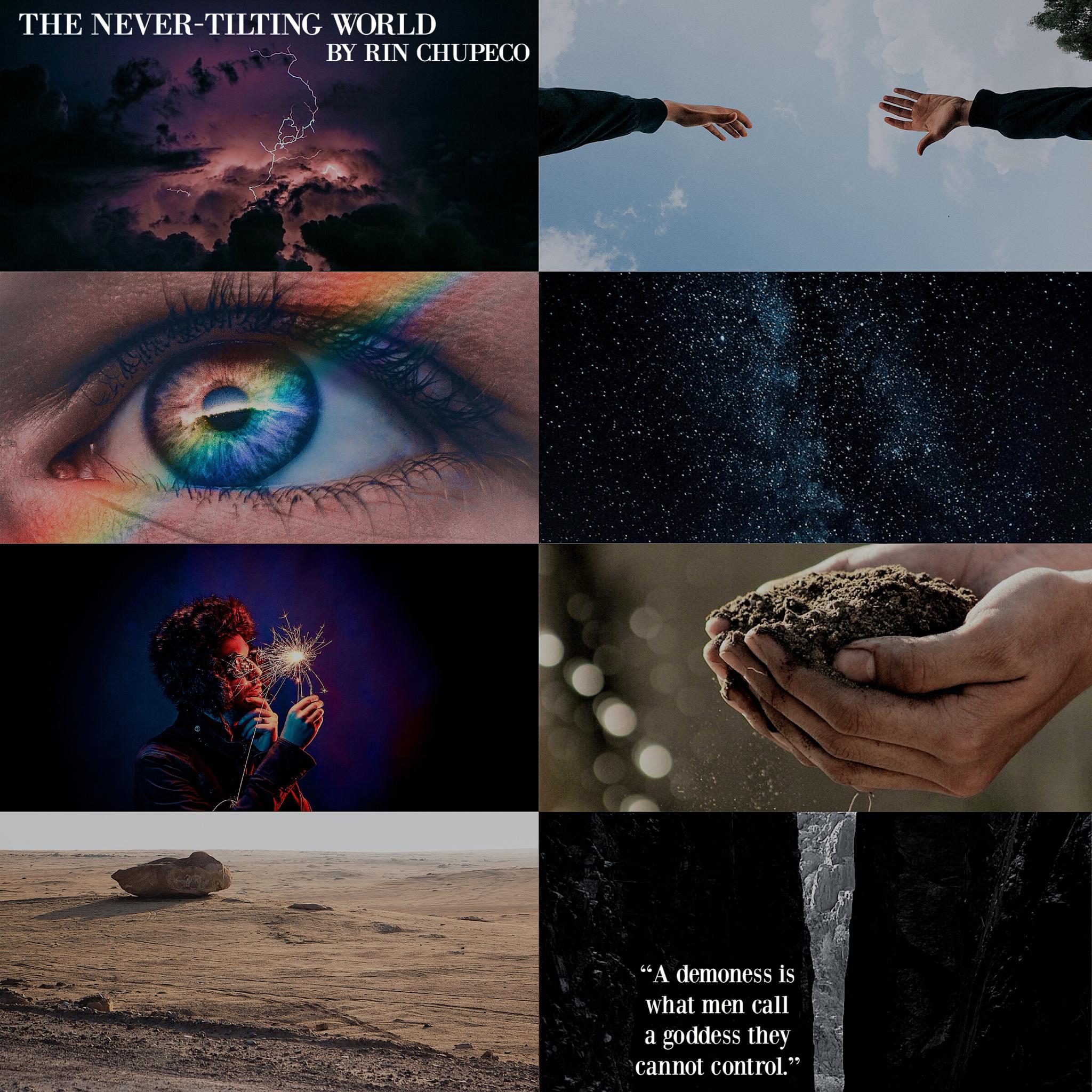 Check out the rest of the wonderful blogs on the tour:

Rin Chupeco has written obscure manuals for complicated computer programs, talked people out of their money at event shows, and done many other terrible things. She now writes about ghosts and fantastic worlds but is still sometimes mistaken for a revenant. She is the author of The Girl from the Well, its sequel, The Suffering, and the Bone Witch trilogy.

Despite an unsettling resemblance to Japanese revenants, Rin always maintains her sense of hummus. Born and raised in Manila, Philippines, she keeps four pets: a dog, two birds, and a husband. Dances like the neighbors are watching.

do you plan to read the never tilting world?? what are some books you’ve read with creative settings??