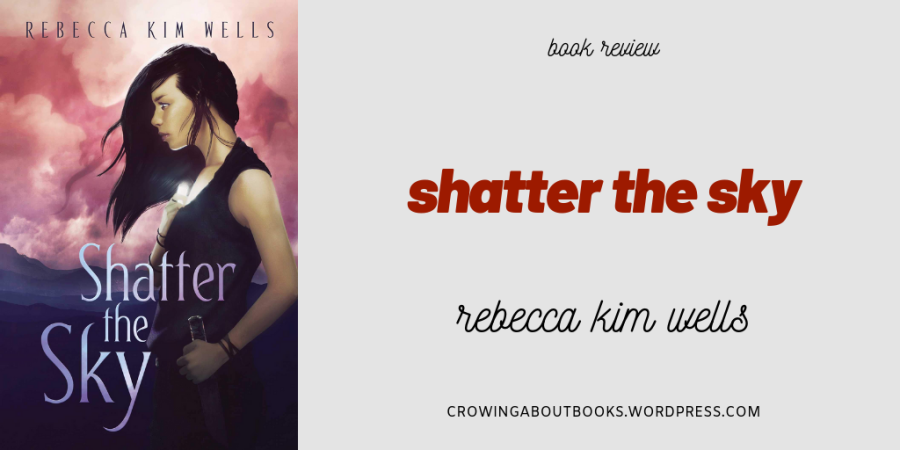 Raised among the ruins of a conquered mountain nation, Maren dreams only of sharing a quiet life with her girlfriend Kaia—until the day Kaia is abducted by the Aurati, prophetic agents of the emperor, and forced to join their ranks. Desperate to save her, Maren hatches a plan to steal one of the emperor’s coveted dragons and storm the Aurati stronghold.

If Maren is to have any hope of succeeding, she must become an apprentice to the Aromatory—the emperor’s mysterious dragon trainer. But Maren is unprepared for the dangerous secrets she uncovers: rumors of a lost prince, a brewing rebellion, and a prophecy that threatens to shatter the empire itself. Not to mention the strange dreams she’s been having about a beast deep underground…

With time running out, can Maren survive long enough to rescue Kaia from impending death? Or could it be that Maren is destined for something greater than she could have ever imagined?

I was so excited about reading Shatter the Sky. I mean, dragons? With a bisexual protagonist on a frantic mission to get back her girlfriend? And while a lot of what I was hoping for delivered as promised, there were a lot of parts that made the book a lot slower than I would have liked.

In general, I liked Maren and her narration; she’s enjoyable to read about, with a streak of determination a mile wide. Yet she’s also your typical Chosen One, despite the attempt Shatter the Sky makes to subvert the trope. Everything works out very well for Maren and her abilities precisely because she is the Chosen One, which is all good, but a lot of Maren’t storyline felt quite unrealistic for me.

Another thing that I wasn’t fond of was, despite the whole plot being Maren aiming to take back her girlfriend, the set-up between Sev and Maren. To me, it seemed to come out of left field, something very odd for a protagonist whose main motivation was to rescue Kaia from the Aurati, and who initially sees meeting Sev as more of a means to that end. Of course, I’m thrilled by the bi rep. But I was really looking forwards to an f/f book, and to have Kaia be in so little of the book was a bit of a letdown for me, and I definitely wanted more depth to their relationship–as well as all of Maren’s relationships.

I did find the worldbuilding quite fascinating, and it was definitely one of the strongest parts of the story. The magic system was not at all typical for fantasy, which I appreciated. I was really into learning about the Aromatory and the Aurati.

The pacing, however, was probably my biggest problem with the book, especially once it hit the fortress–it really started to drag, and I couldn’t keep interested afterwards. There was so much of the world I wanted to see that interested me – the dragons, the Aurati, the dynamics between the main empire and Maren’s hometown – but ultimately it wasn’t explored as much as I would have liked.

Even though this book may not have been my particular cup of tea, it’s still definitely worth a read. If you’re looking for some good bi rep, or if you’re a particular fan of dragon fantasy, go ahead and check it out!

have you read shatter the sky?? what are your favourite dragon books??