Top Ten Tuesday is a weekly meme run by That Artsy Reader Girl.

Hiya folks!! Today’s topic is the characters that remind you of yourself, which is a Loaded Topic. Most of the characters my friends see me as I think are waaayyy too good for me. Arya Stark? Inej Ghafa? I could never be them.

Luckily, this list is the characters that remind me of myself.

Okay, way way back when I was twelve, Percy Jackson reminded me of myself so hard. I’d just been diagnosed with ADHD around the time I found the books, so seeing this badass snarky demigod–with ADHD–was a godsend for me. Add the bullying, demon teachers, and people always blaming me for things that went wrong even though I had no hand in them, and I was so like Percy.

I also think Nico di Angelo is a lot like me because we both used to be tiny sullen gay emos but are doing a lot better now and are just gay and tiny. 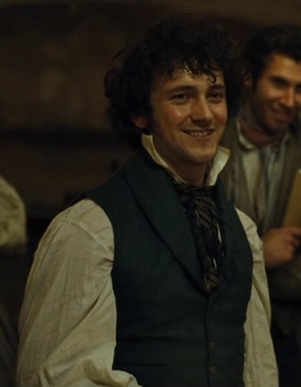 Grantaire from Les Misérables is another one of the characters I’ve never related so hard to. Mostly book Grantaire, too, though I’d be lying if I said that fanfiction didn’t factor into a lot why I related to Grantaire so much–a lot of fanfiction portrays Grantaire with depression and dealing with it in a very snarky, matter of fact manner, which is pretty much how I cope too. We’re both cynical little sh*theads, though I’ve certainly gotten a bit better at not being annoying since I was 15.

Eliza from Eliza and Her Monsters by Francesca Zappia reminded me of myself so much while reading it that it hurt. I’m not really a talented creator or anything, but I like making things and putting them out into the world, and like Eliza I have pretty bad social anxiety disorder that has stopped me from doing so many things. Online is easier.

Another character that really has my heart is Tiberius Blackthorn from The Dark Artifices! I adore Ty with all my heart and I’ve honestly never seen an autistic character written this well before by someone who isn’t autistic. There are so many things he does that I went, “ahaha, I do that!” about. Being obsessed with a 19th century book (see: Grantaire), touch aversion, being overwhelmed by sounds, stimming in ways that isn’t exactly the stereotypical “hand flap” but still weird others out (which I have NEVER seen in fiction before, ownvoices or not), being fascinated by morbid things like true crime and pyromania. I think I talk about Ty too much, but HE REALLY GETS ME. Also, I too am in love with Kit Herondale but at least I know it. (Both of us are a bit, um, emotionally dense as well.)

Jesper Fahey from Six of Crows is essentially me as well. Basically because we’re both bisexual, can’t sit still in a university class, in love with Wylan van Eck, have ADHD, and are extreme dumbasses. I’m nowhere as good as he is with guns though – the only time I ever shot a pistol I was too nervous to really think about aiming correctly. Guns look cool (case in point: look at Jesper, looking very cool over there with his pistols), but being around them in real life is absolutely terrifying. When I was younger, I also related a lot to Luna Lovegood from Harry Potter, because of how eccentric she was. I also really admired her because she could just be herself without caring what anyone else thought.

Jess Wong from A Line in the Dark by Malinda Lo was also someone I related to so much. Not only is she a queer Chinese girl who shares my first name, but her character touches on the darker parts of my personality–the jealousy, the envy, the wanting for more than I already have. Jess isn’t really a likable character, but there were so many parts of her that reminded me of myself. Reading A Line in the Dark was a pretty weird and uncomfortable experience because I saw so much of me in her and none of it was good.

Aled Last from Radio Silence by Alice Oseman is just so soft and needs a break from university, and you know what, so do I. (I say as I am hurling myself off on a month-long study abroad, coming home, and then going for a second study abroad…) But he’s also a dedicated creator and I can really identify with that. All my life I’ve wanted to write, draw, and create things, and even though life and mental health can get in the way, we both strive to keep coming back.

I’m going to throw some honorable mentions down as well, because why not:

What characters remind you of yourself?

12 thoughts on “Top Ten Tuesday: Characters That Remind Me of Myself”